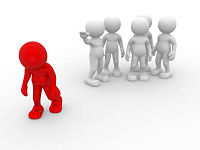 Have you ever lost a job, been terminated one way or another? Not fun, right? Most people feel considerable anger and hostility about their termination experience–It’s not fair! It’s not right! Why me? Stupid management! Terrible decision!

The conventional wisdom among career professionals is to ignore these highly charged emotions and get their clients looking for another job right away. I beg to differ.

My personal and professional experience has demonstrated to me the necessity of taking time to deal with these feelings of anger, disappointment, and pain of rejection in an effective manner…before it deals with you!

The negative effects of job loss can be devastating for many individuals. I have learned that expressing these highly charged feelings, safely, helps to mitigate their power over individuals.

For example, I have a client who was terminated after 20+ years with the same company; even after six months he still gets angry about the “injustice” of his layoff, then falls into a depressive episode. I encouraged him to sit down, whenever this situation occurs, and write out his thoughts and feelings, just let it flow out in a stream of consciousness, no censoring, no editing. As he says, “the very act of articulating our thoughts and feelings can have a normalizing effect on the emotional state.”

It is one thing to know this but another to prove it through a scientific approach. Luckily, that’s exactly what was done when researchers Spera, Buhrfeind & Pennebaker (1994) designed a study to address the emotional effects of job loss with 63 recently unemployed professionals (mostly middle-aged engineers). They tested the impact of disclosive writing on their subsequent reemployment activity and success.

Interestingly, results showed no real difference between experimental and control groups on behaviours related to:

a. reducing stress as indicated by self-report measures and physiological markers (blood pressure, weight, and heart rate); or,
b. increasing motivation to look for another job as evidenced by phone calling, letter writing, and interviewing behaviours.

They caution both job seekers and their career counsellors about dismissing this psychological processing in favour of immediate job search activity.

In addition, the subjects themselves were adamant that the writing process would have been more useful to them at the time of departure from their jobs than it was several months later.

That is why writing exercises are at the core of what I do. Yes, it is important to express feelings about job loss in order to clear some emotional space to move on to another job or change careers. But it is also essential in my view to write about times in your life when you are doing what you enjoy most and well, in order to establish more clarity and confidence about what you offer others through your work.

Discharge negative feelings, then recharge with proof positive of your strengths and value in the world of work!