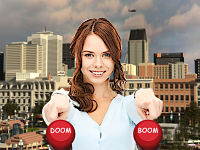 Where will the jobs be this year? What are the jobs of the future? What will they pay? These were just a few questions posed to me on Boxing Day by a technology reporter based in New York.

But who can read the future accurately? For example, the top 10 in-demand occupations of 2016 had not yet been invented in 2000, jobs like Gamification Specialist.

What we can do is look at broad social, technological and economic trends and draw some conclusions that may assist you with your career decision-making over the next year or so.

On the doom side

The spectacular economic growth of the past 100 years that was fuelled by technological innovation in electricity, telephones, motorized transport, computers and high finance is now spent. Since the economic meltdown of 2008, the economies of the West have been stagnant due to job loss, lower levels of real earnings, higher poverty rates among working people, cuts to benefits—leaving many struggling to afford the basics.

Of course, loss for some is gain for others. Banks and lenders flourish in such times, as do certain retail chains, entertainment franchises, real estate niches, and other sectors.

Governments will struggle to tame the unruly forces of automation and globalization that have shredded job security as the foundation of liberal democracies for decades, as global inequality between the haves and have-nots widens and aging populations put increasing pressure on taxpayers

In short, good secure jobs will be hard to come by and wages will not grow significantly in most sectors, so public and personal debt will skyrocket.

On the boom side

Many pundits claim the future looks bright — driven by a new age of invention, especially in areas such as computing, robotics, materials and bioengineering.

Although young adults are finding expensive education does not necessarily lead to lucrative careers, those that choose STEM education are more likely to find occupations in the fields of science, technology, engineering and math.

Work and gains are real and growing, according to this view, but they don’t show up in GDP because the myriad ways we serve and entertain each other on the web can’t be measured in conventional terms.

As wealth and education spread to Asia and other formerly poor regions of the world, the idea is that even we in the world’s richest nations will benefit. For example, certain stock markets and real estate sectors are booming due to foreign investors.

Wherever you fit on the spectrum between doom or boom, you are unlikely to experience a great deal of change in 2017. If you have a job now, you will likely keep that job throughout the coming year.

But the disruptions that are now working their way through our economies will affect you in surprising and unexpected ways the next 5-10 years, that is guaranteed.