During the past 20 years as a job change expert, I have met dozens of men and women in hi-tech careers with a passion for a creative activity.

The computer programmer who builds customized electric guitars. The senior network specialist who travels the country to compete in paintball. The ITIL specialist who hosts folk music concerts in his home. The software designer who provides black belt martial arts instruction to hundreds of students. The systems development manager who studies astronomy. I can go on and on.

But in every case, none of these individuals developed a new career, or even
a second career, around that particular passion. Everyone is creative, everyone
has passions. But not everyone can create a job out of their passions. Why?

Because it’s not about taking one particular activity/passion and building a
new career around it, like someone having a passion for sewing, and saying, “I
love sewing so I’m going to work as a tailor or a seamstress.”

The software programmer does not usually give up a lucrative job to eke out a
living customizing electric guitars, unless they had FaceBook shares they cashed
in during the IPO, or their parents die and leave them a fortune, or they win
the lottery….it happens, sure, but rarely.

The simple fact is that the earnings of hi-tech professionals are much
greater than what they could make with their hobby passion. That’s what holds
them back, the trade-off between having fun and having financial security. They
believe the two are mutually exclusive.

For years, they’ve been molded by what they do, and paid extremely well for
doing it. Even if they come to hate their work, they believe there only option
is to stick to their hi-tech job box. They want to bust out of the box but fear
negative consequences. It’s called a rut, which is sometimes described as a
coffin with the ends knocked out. 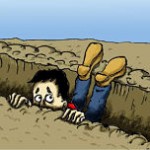 In the same way that the rut is linear, stretched out in one direction, they
think of their options in terms of the same left-brain, cause-and-effect
relationship. They see a line between what they do now and what they are
passionate about, and the connection does not compute.

They are focusing on the component parts of their lives, instead of looking
at the relationships between the parts. When they are doing what they enjoy
most—whether it’s building guitars, devising winning paintball strategies,
hosting folk music concerts, teaching martial arts, or studying astronomy—they
are engaged in a motivational pattern, one that is organized around their key
success factors.

It’s all about the pattern, the relationships between those factors that
energize them. Those factors can be defined, the pattern can be mapped. When
they see how their passion simply reveals certain aspects of their pattern, they
see how their talents and motivations match many kinds of jobs or careers in
specific work settings.

Busting out of the box is then possible. The dead end rut gives way to
shining path of real opportunity for a new kind of life, one that offers
financial security and job joy!