One Word Changed Her Life 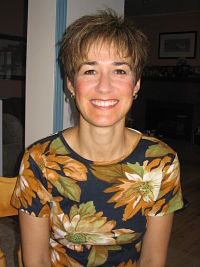 Maureen Dagg came to George’s office after seeing his webpage, liking it, and being intrigued by the name JobJoy.

She had been a stay-at-home mom for the last 17 years. Before that she had been a computer analyst for a high-tech company and a high school computer teacher for four years.

She had a degree in computer science / mathematics. She had done programming, user interface design technical support and went back to university and got her education degree. Then she became a computer studies department head at a high school for four years. “I’m generally proficient at most things I try–even if I don’t enjoy doing them.”

“I can do it well—but, I’m not that much of a geek. I’m really very artistic,” said Moe.

“As a computer teacher I really enjoyed setting up the curriculum and setting up all the programs and how it worked. The kids were great. But after teaching the same subjects for a couple of years, it wasn’t challenging anymore.”

She is so artistic, while raising her two adopted children, she started a part-time toenail painting business called Moe’s Toes.

“I did a JobJoy Report assessment with George about 5 years ago. His analysis changed my life.

“That was extremely emotional for me,” said Moe. “It was probably the most profound insight anyone had given me about myself. I cried. I cried a lot. It was very profound.

“I love working with George! I love the story analysis approach, and his solid advice. They were not just work experiences. He asked me what got me specifically excited. He made me really define things about it that were cool. Very, very important. George separated my natural talents from my just can do skills–including the ones I do really well.

“That’s important if I spend all my time doing thing that I can do, like cleaning my house. It’s not something I want to be doing. It de-energizes me. I had just had 17 years doing that. I just didn’t have big enough challenges.

“I love the idea that he has one word to describe who I am, and what motivates me: catalyst.”

“It explained to me why certain things happened to me in my life. Why certain people came to me with problems.

“Later, when I told my friends, they said, ‘Of course you’re a catalyst.’ But even my closest friends hadn’t articulated to me who I am as well as George.”

Because she didn’t need to work for financial reasons, she had a lot of stops and starts along the way, and fell into a mild depression at one point–because the whole prospect of going back to work raised all kinds of issues for her. So last year, she joined George’s JobJoy Bootcamp to learn and apply the job search tools and techniques to get a job, and in December made a renewed commitment to “get a job.”

In May of 2012–within five months of the commitment that she made to herself!!! (after 17 years as a stay-at-home mom!!!)–she was hired as a Special Project Advisor for an firm that’s creating a learning organization for consultants who work with 70% of the physicians in Canada. The consultants help the physicians manage the business aspects of being doctors.