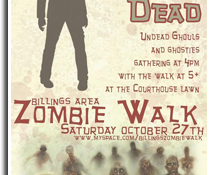 4 thoughts on “Break out of Zombieland!”