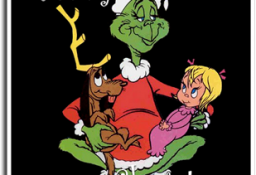 This is the time of year when various versions of ‘How the Grinch Stole Christmas’ appear on television. He’s a mean one, Mr. Grinch—that ol’ sourpuss who had his heart broken as a young man (he lost his girl to his rival, the mayor of Who-ville.)

Misery loves company, and the Grinch tries to ruin Christmas for all the citizens of Who-ville by stealing all their presents and sabotaging their holiday celebrations.

I love that scene where he stares down at Who-ville listening to the men, women and children singing Christmas carols. He realizes he didn’t stop Christmas because the spirit of Christmas is not contained in presents or feasts.

“And what happened then…?
Well…in Who-ville they say
That the Grinch’s small heart
Grew three sizes that day!”

He restores the presents and food to Who-ville, and is welcomed back into the heart of village life.

One suspects that the author, Dr. Seuss (Ted Geisel), had experienced his fair share of disappointment in life, in order to write such a compelling and convincing tale. In fact, we know that he tried to publish his first book, and was rejected by 27 publishers. Rejection is hard to take. Look what it did to the Grinch!

However, the initial rejection experienced by Dr. Seuss (and so many first time authors, I might add), is not the final word; unless, we let that rejection define our behavior, as was the case for the Grinch.

I have met many individuals of exceptional talent, each of whom had tremendous prospects for employment. They clearly identified a job target, and put together a plan of action that filled them with enthusiasm. But their initial efforts didn’t hit the mark. Instead, they experience rejection, and rejection is hard to take. If they let that rejection define their behavior, then their desire for a better jobfit, a better life, grows cold.

Obstacles to success should not be interpreted as stop signs. They are inevitable. Instead of pressing through them, I have seen many individuals give up and return to the same work that was driving them crazy in the first place! Better the devil you know….

However, the devil is a cold-hearted taskmaster, and submitting to a job misfit with all the stress and tension that accompanies it is enough to turn most people into a Grinch!

Like Dr. Seuss, there are some amazing stories of tenacity and perseverance that should inspire all of us with realistic hope. Here are some popular stories of failures suffered by some very successful people before they broke through into a better jobfit.

o Albert Einstein was four-years-old before he could speak.
o Isaac Newton did poorly in grade school.
o Ludwig Beethoven’s music teacher once said of him “as a composer he is hopeless.”
o Thomas Edison’ s teacher said of the boy, “He is too stupid to learn anything.”
o F.W.Woolworth got a job in a dry good store when he was 21, but his employer would not let him wait on customers because he “didn’t have enough sense.”
o Michael Jordan was dropped from his high school basketball team.
o A newspaper editor fired Walt Disney because he had “no good ideas.”
o Winston Churchill failed the 6th grade.
o Steven Spielberg dropped out of high school in his first year. He was persuaded to come back and placed in a learning disabled class. He lasted a month and dropped out of school, never to return, but went on to create some of the most memorable Hollywood movies ever made, and become one of its richest directors.

If you hate your job, you should be happy! As Benjamin Franklin said, “Those things that hurt, instruct.” The people listed above succeeded in life because they were wise enough to NOT organize their lives around their failures. Instead, like Dr. Seuss, they focused on what really mattered to them. They established goals and took effective actions to create positive results in their lives.

Eric Hoffer, an American philosopher and contemporary of Dr. Seuss, wrote: “Our achievements speak for themselves. What we have to keep track of are our failures, discouragements, and doubts. We tend to forget the past difficulties, the many false starts, and the painful groping. We see our past achievements as the end result of a clean forward thrust, and our present difficulties as signs of failure and decay.” Which is another way of saying, the road to success is a bumpy one. Or, every overnight success takes twenty years. Pick the cliché, adage, or proverb on the tip of your tongue.

Remember it took Dr. Seuss thousands of tears to produce the joy of Christmas in Who-ville! Never give up on what really, really matters to you.

May the spirit of Christmas reign in your heart this holiday season and throughout the coming year!

8 thoughts on “A Job Change Lesson from the Grinch”